From War to Poverty and Poverty to War 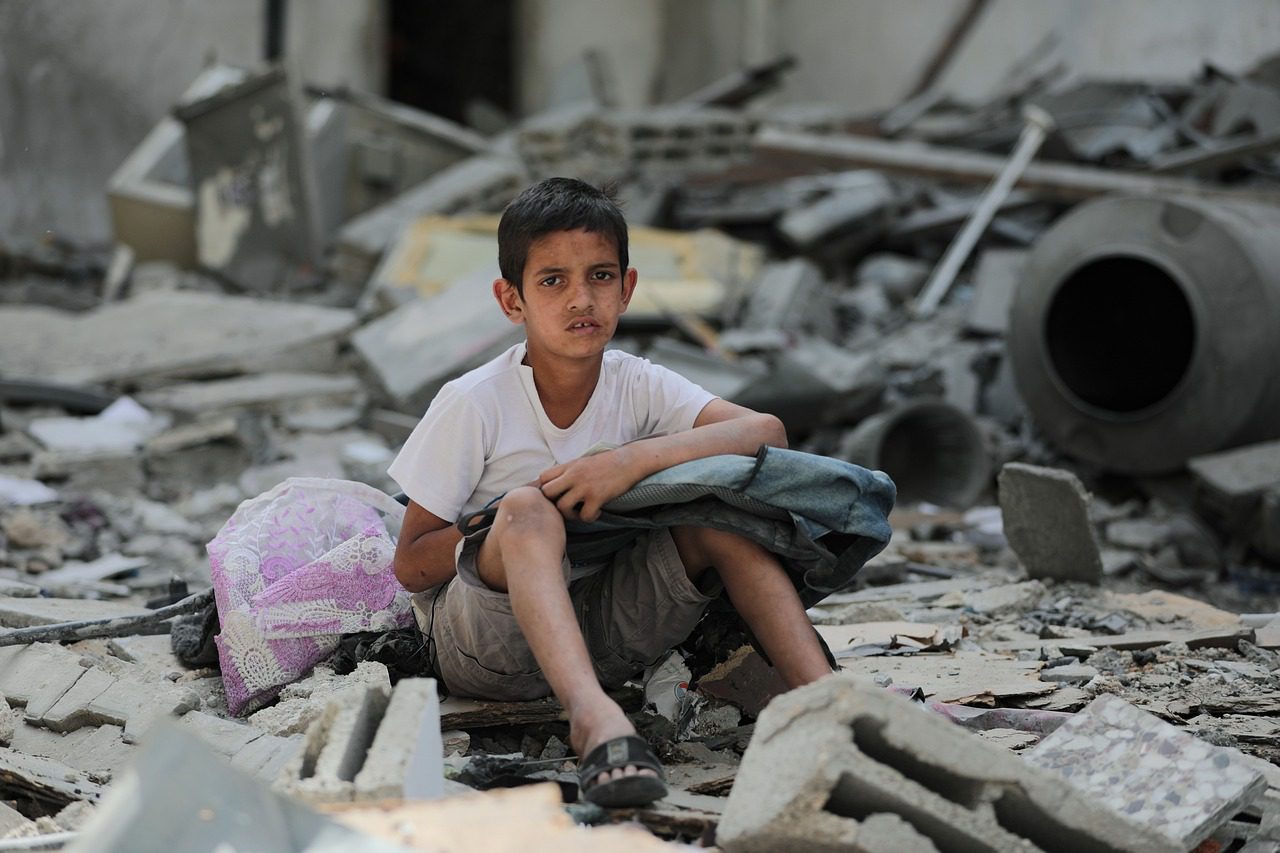 Conversations on war and poverty are widespread and crucial to understanding the connection between violence and the global poor. The link is undeniable, and there are many reasons why it remains and persists to this day – most notably in the developing world. From the current crisis in Ukraine and the mass displacement of refugees into neighbouring Poland to the ongoing civil unrest in Myanmar and the recruitment of child soldiers from poor backgrounds; there is no shortage of examples where war leads to poverty and poverty to war.

What is somewhat under-discussed however, is how the phenomenon disproportionately impacts the lives of children who find themselves caught in the middle of conflicts. In 2005, the United Nations Security Council set out six violations of children’s rights to be monitored during times of warfare. These are the killing and maiming of children; recruitment of child soldiers; sexual violence against children; child abduction; attacks against schools or hospitals and the denial of humanitarian aid to children[i]. 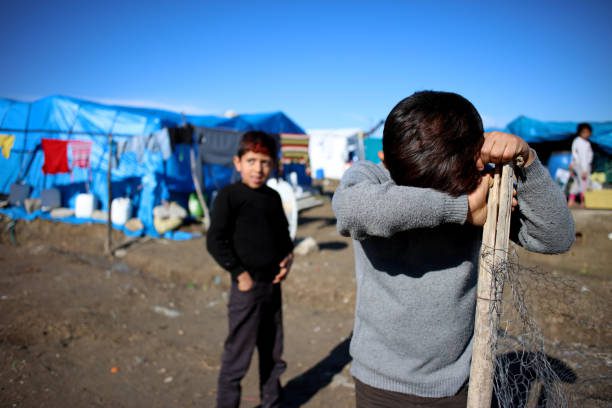 However, whether it’s through the absence of education and sanitation affecting their social and cognitive development, issues relating to malnutrition and poor healthcare stunting their growth or the myriad of problems associated with living as a refugee fleeing warzones; war and conflict continue to produce incidences of poverty that have heavy and lasting impacts on the children involved.

When discussing war and poverty there are often two thought processes. One views poverty as a consequence of war and conflict, and the other views war and conflict as a product of poverty. Both are true to a point, but what needs to be understood is how one will, for the most part, always exist in conjunction with the other – especially in the context of civil wars.

Such a picture has never been truer than when it comes to child poverty. Children living in poverty are often pushed to desperate ends to produce capital when other means fail them, often turning to crime which can, in some instances, result in violence and warfare – especially in areas where gang culture presides. Whilst this may present an extreme example, it is not uncommon – especially in the epicentre of the War on Drugs in South American countries such as Mexico, Colombia, and Venezuela where children from poor backgrounds are recruited as drug mules. If the children in these situations manage to escape, they often suffer severely from drug addiction, preventing social reintegration and maintaining their position of poverty.

On the flip side, children living in areas hit by war often find themselves living in abject poverty either as refugees in a strange land or worse still, continuing to live in a war zone with the daily risk of injury or death.

War and Conflict as a Producer of Poverty

War is indisputably a creator and maintainer of global poverty. Generally speaking, war-affected regions have higher levels of poverty. This is because war damages a community’s infrastructure and institutions; causes the destruction of national and personal assets; fragments communities and their communication networks; and causes the debilitation and deaths of a large proportion of the population[ii]. During times of conflict and war, people lose their houses, their land, and their assets usually utilised to produce capital. 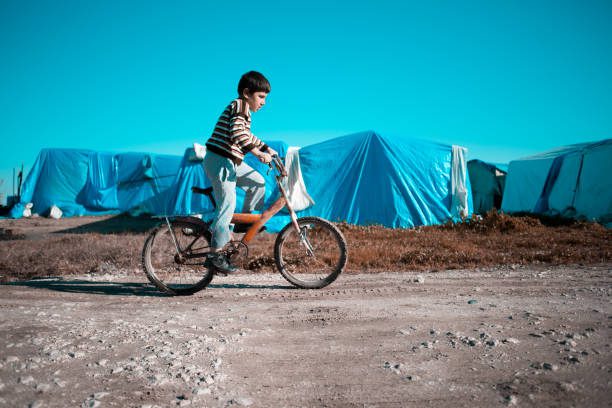 What is often overlooked, however, is how the impacts of war often leave lasting legacies on the populations who experience them. Living in the aftermath of war often proves difficult for many people, especially those in hard-hit areas. Whilst on the macro-level, temporary destruction of capital can be circumvented through long-term investment; the micro-level individual, social and psychological effects can be far harder to subvert, especially for the children of war who are displaced, injured, orphaned, or recruited by militia groups who often suffer with their mental health following resolution[iii]. Evidence suggests that the impacts of conflict on education and health at the individual and household level can still be observed decades after conflict resolution[iv].

The risk posed to children by war is in many ways greater than that posed to other members of a community, with one in ten children globally being affected by armed conflict[v] and one in six living in conflict zones[vi]. This is partly because children haven’t fully developed the cognitive agency to understand imminent threats and do not have the resources to remove themselves from them. As such, they often find themselves either caught up in or controlled by war and conflict because they don’t possess the means to escape.

The risk is further increased, in certain instances, when children are targeted by armed groups. When children are targeted or killed it is often done so as a terror tactic to reaffirm brutality and gain notoriety. It shows that a group is willing to engage the most vulnerable in society to confirm its position in a conflict. However, the result of such targeting is not always to kill but rather to abduct and recruit children to fight in wars. Warring factions often kidnap children as they are more easily manipulated and can be indoctrinated to commit crimes without question[vii].

Poverty as a Producer of War and Conflict

Whilst it is obvious that war reproduces existing poverty trends and creates new ones, it is also more than plausible that poverty produces a set of circumstances that exacerbates divides and produces war and conflict itself. This is especially the case for civil war, a phenomenon largely prominent in the developing world. Research suggests that if you reside in a poorer area, you are more likely to be exposed to, and partake in, violence in civil war[viii]. At the state level, poverty compounds vulnerability to an insurgency by lowering the opportunity cost for the mobilisation of violence[ix]. For example, perceived inequality through high levels of unemployment, low levels of education and social development are often prime motivators for violence and a reason to enact a revolt.

When poor groups revolt, they often rely on voluntary recruits at first. But when voluntary recruits dry up, many turn to forced recruitment. Children can be at the centre of this with some rebel groups forcibly recruiting children from poorer backgrounds to fight – a practice that has been particularly utilised heavily in the civil conflicts taking place in Myanmar and Sierra Leone.

Africa has become the epicentre for violent conflict involving child soldiers[x] with 40% of all child soldiers globally active on the continent[xi]. This number is made even greater when the recruitment of children is not just committed by poor militia groups but also by lower-income nation-states.

In 2004 the government forces of Burundi were found to be forcibly abducting and recruiting child soldiers from the country’s poorest regions[xii]. Boys as young as ten were serving in the armed forces and militia whilst girls of a similar age were being sold into sexual slavery. Even when demobilisation schemes were enforced by UNICEF, many children showed signs of trauma with others expressing concerns about the inadequate rehabilitation preparations[xiii]. This resulted in multiple children re-joining armed groups but this time in the form of non-governmental militia factions where they further suffered the impacts of poverty and violence.

The most important thing to note when discussing the link between poverty and war and conflict is the risk of conflict reoccurrence among poor populations. For those living in poverty, there is a greater chance of conflict reoccurrence than that of more economically advanced areas, especially when insurgent civil wars fail to procure the goal that was set to achieve in the first instance. This is especially true when the already low levels of infrastructure in poorer areas are left without investment following times of conflict, only acting to widen the gap between the rich and the poor in societies.

Despite the best efforts of the UN and its partner agencies to tackle the issues associated with child poverty and exploitation in times of conflict, there is still a strong relationship between impoverished children and acts of violence. Whether this is the infliction of violence on poor populations by external actors or the taking-up of arms by the global poor in insurgencies to change the status quo, it still remains a fact that poor children pay the price of war and conflict.

[vi] Save the Children. (2022). Countries in Conflict. https://www.savethechildren.org/us/charity-stories/worst-conflict-affected-countries-to-be-a-child