Fact one: the number of multi-dimensionally poor children

UNICEF unequivocally finds that on a global scale approximately a billion children are ‘multi-dimensionally poor’. What precisely does that mean? Essentially, these children have limited or no access to fundamental services, rights and provisions. For example, they are unable to enjoy a formal education programme, or rely on decent sanitation services and a clean drinking water supply. Moreover, they lack healthy, nutritional diets which makes huge impacts on their physical and mental health. They also live in unsafe or insecure housing, or no housing at all. Moreover, they are unlikely to enjoy officially recognised human rights.

Fact two: the number of children in extreme poverty

UNICEF estimates that 365 million children are living in ‘extreme poverty’. This means that they are in families or groups which survive on less income than the official extreme poverty line which, at present, is an all too arbitrary straight line drawn across global demographic income at just $2.15 per person a day. The consequences of the arising deprivation are stark: these children are twice as likely to die in childhood when compared to those from better off backgrounds. Save the Children explains that almost six million children die every year from illness and diseases which are curable. On average that’s over 16,000 a day, or about one every five seconds. The vast majority of these impoverished children live among very poor communities and conditions. Yet it is within the power of the world’s developed countries to prevent most of those deaths.

This begs the question, why don’t they do so? Financial constraints play a significant part, but insular, domestic policies and legislation programmes also tend to dominate the political landscape, that is, until priorities shift. Unfortunately, presenting evidence that the eradication of child poverty would be beneficial for everybody is more of a challenge than it sounds. Traditionally charities, pressure groups and religious organisations have focussed on presenting child poverty as part and parcel of all poverty, rather than as a discrete and vital component part. By contrast, the United Nations’ first sustainable development goal is to end poverty ‘in all its forms’. By this subtle change of emphasis, it is proving possible to endorse and incentivise action in a more focussed way. The shift from a traditional approach to global poverty is placing children’s wellbeing at the centre of direct intervention, a desperately needed improvement as facts three to six show. 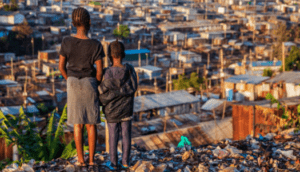 Fact three: why are more children living in extreme poverty than adults?

There are twice as many children living in extreme poverty than there are adults. The arithmetic is compelling: about a third of the world’s population is under the age of eighteen, but about half of all people living in extreme poverty are children. This of course makes perfect sense if you remember that very poor families tend to be large. And the older children tend to find themselves helping their parents with informal childcare and taking on work, which is very low paid and sometimes dangerous.

Save the Children demonstrates that children who live in extreme poverty are vulnerable to early marriage, violence at the hands of gangs, child labour and trafficking. It is a grim reality that poverty leads to desperation and exploitation. The least protected in the global community face stark dilemmas in their struggle to raise even a little income. Turning to crime and black-market activity is hardly a choice for countless young people. There is something appallingly inevitable, and cyclical, about the consequences of extreme poverty.

Save the children have recently drawn attention to what it describes as the global malnutrition crisis. The situation in Somalia and Sudan, in particular, has reached a devastating point. The charity cites another halting statistic, that approximately sixty million children under the age of five are suffering from ‘wasting’. Technically that means that they have an unhealthily low weight to height ratio. Save the Children estimate that in Somalia alone there are about 513,000 young children who face the risk of death because of their undernourishment.

The key point is that malnutrition is almost always reversible, so long as there is appropriate funding from national and international communities. So, this is really a question of priorities. Where on the ever-shifting scale of political agendas does child malnutrition sit?

Children who live in extreme poverty have few prospects for self-improvement. We are not talking about improving things so that more children survive to adulthood. Political transformation in approach to child poverty is urgently needed to give the poorest children opportunities to thrive and not simply survive. Expectations need to be challenged, otherwise there will be an uptick in survival rates, but poverty will inevitably continue to stifle ambitions and prospects. Moreover, lack of access to opportunities, both educational and vocational, is double edged. First, it is a major contributing factor to child poverty in the first place. If children cannot enjoy a decent education they are likely to continue to live in poverty. Many will feel unmotivated to attempt to self-improve and change their circumstances because of the conditions in which they live.

Of course, an equally significant consequence is that child poverty is also, therefore, a barrier to preventing shared prosperity in the future. Child poverty becomes self-perpetuating leading to more of the same. If a family living in poverty has more children, then they inevitably become poorer still because the overall household income is divided by a higher number and that income needs to stretch further. Therefore, this means that children living in poverty are in several ways a consequence of poverty and, simultaneously, a further cause of it. It also means that poor families living just above the poverty line are destined to fall beneath it if they have more children. This is a difficult reality to come to terms with. Moreover, child poverty also squanders potential, which disadvantages everybody in all echelons of society.

What can be done to improve the situation?

It’s all too easy to ask why we have not addressed and resolved the world’s most pressing issues, such as child poverty. The answer is not straightforward. A statistical approach such as Katharina Fenz adopts suggests that it ought to be possible to target resources at particular countries and communities to reduce child poverty by a significant amount. The eight countries with the highest rates of child poverty, amounting to over 50% of the global tally, are (in descending order): Nigeria, Democratic Republic of the Congo, India, Tanzania, Ethiopia, Madagascar, Yemen, and Afghanistan.

If initiatives to tackle child poverty were especially targeted at these eight countries it would be feasible to reckon that over fifty percent of the global problem were being addressed in a coordinated manner. That does not mean that other countries where child poverty is prevalent would just be ignored. But concentrating for a short period on these named countries would ensure that the headline figures would drop quickly. With the momentum generated and knowledge gained it should be possible to roll out similar programmes in an efficient way elsewhere. Africa and India provide an opportunity to collaborate and focus attention onto particularly challenging areas. This is where data and its analysis can be exploited to galvanise awareness and to progress priorities and initiatives.

Addressing both parental and child status when tackling child poverty is becoming a progressive methodology. For example, parents can be offered training and opportunities to study. The economic benefit is tangible whenever improved job prospects are a natural outcome of such intervention. Higher pay naturally means the chance to improve family living standards. If, on the other hand, low-income parents are provided with access to professional childcare services then the benefits for the children are also indisputable. For instance, children aged three whose parents work and use childcare services typically have a working vocabulary of 575 words. This compares to children of unemployed parents who did not go into higher education, whose vocabulary is typically only 300 words.

Moreover, parental expectations regarding the general value and utility of education impacts on the expectations of their children. This is a significant insight which underscores the importance of a two-generation approach to tackling causes of child poverty. After all, attendance at school is broadening, and can foster aspirations. If it is motivational then is it potentially transformative. 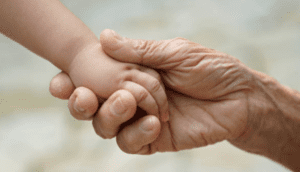 In conclusion, empowering people, especially children, to lift themselves out of impoverishment is a top priority for addressing the injustice of child poverty. Increasing access to education and training can generate desirable aspirations at a personal level which are central to this strategy. Targeting specific communities and countries remains an important priority, and not just for UNICEF. There is a whole sector of organisations of various sizes and cultural backgrounds that operate in this way which is driving improvement across all poverty metrics.